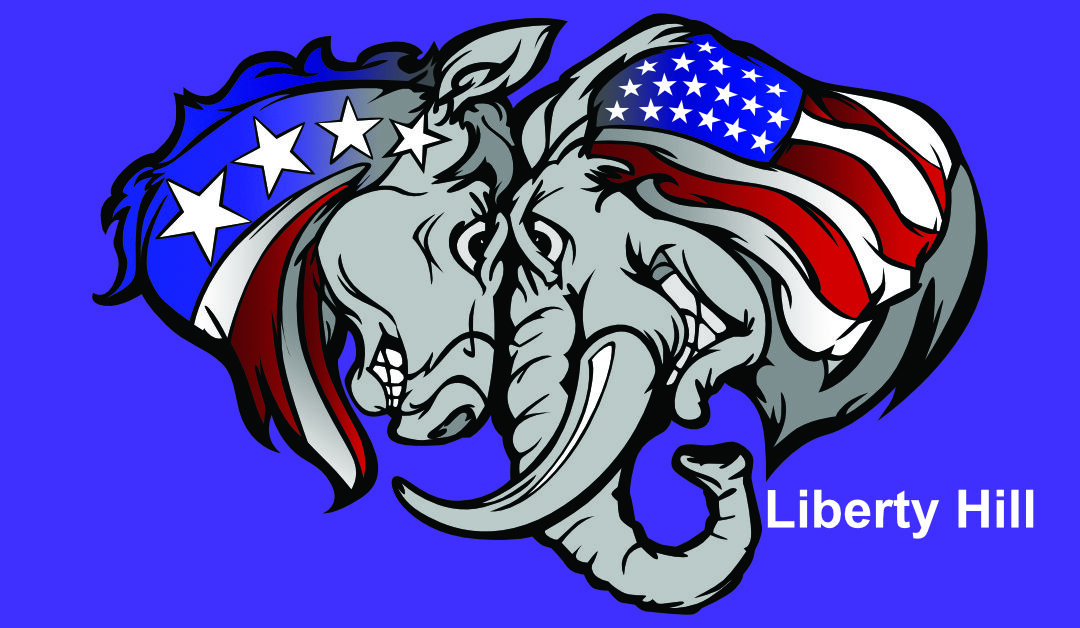 When I first moved to Liberty Hill, one of my daughters told me of an event that happened to her at the public school.  Some of the students, after meeting her, asked her if she was a Republican or a Democrat.  That was the first indicator that I was going to love Liberty Hill (and the inspiration for this article’s image). Even the students care about politics!  In addition, we soon found that it is completely appropriate to ask people what church they go to.  Immediately, I called some of my friends in other states and told them how different and refreshing Liberty Hill Texas is.  People often talk about voting for individual candidates rather than political parties, and there is value in that.  On the other hand, politicians will often say whatever people want to hear in order to get elected, and without knowing someone personally, it is very hard to judge their character.  I personally take a person’s political party very seriously.  There are certain issues and values that are part of political platforms that I care very deeply about and being aligned with a political party holds them accountable to some level to promote those platforms.  Yes, each person is their own individual, but parties unite them with a similar vision.  While the city council election is not partisan in the sense of Republican or Democrat, nevertheless, the citizens are being faced with a choice between two political parties in this election, and who they choose to elect will have serious ramifications for Liberty Hill.

During this campaign season, I have gotten to know Troy Whitehead and Liz Branigan.  I am convinced that the three of us are the right team for city council, and that we will fulfill our responsibilities to the citizens of Liberty Hill with excellence.  We are all very different but have developed a mutual respect.  All of us are independent thinkers, team players and bring different talents and skills to the council that will lead the city in responsibly managing growth.  What I believed to be true before the debate on Tuesday, April 18th, I am now convinced of more than ever.  If you did not watch the debate, I encourage you to do so (the sound gets better throughout it). Liberty Hill is being offered two completely different councils that have a different vision for Liberty Hill that will operate with a different leadership structure.  They also see their primary responsibilities differently.

From my perspective, a city council is primarily accountable to the needs and interests of its citizens.  We are to hear concerns from those outside the city, but we are ultimately accountable to the citizens of Liberty Hill.  The citizens pay property taxes, which are the primary revenue stream of cities.  The citizens are responsible for debt coverage for capital expenses to build out infrastructure.  The citizens are the ones who carry the financial burden of ongoing services the city provides.  At the end of the day, the City Council must put the interests of citizens first.  Businesses in Liberty Hill come second because they pay sales tax and are very much a part of the city.  Other voices are to be heard as well, but it all goes back to citizens.  Having good relations outside the city limits where possible, serves the citizens of Liberty Hill.  The council exists for the benefit and service of the city, period.

One of the primary objectives of city leadership is to secure additional long-term revenue streams for the city as well as securing commercial corridors that will provide revenue streams for the city.  This requires extending infrastructure to developing areas (hopefully leveraging the developers to pick up some or all of the cost).  At the same time, the city needs to have a clear vision of what our identity is and how we direct growth to accomplish it.  For me, what will set Liberty Hill apart is a family atmosphere.  We should be known for a beautiful, well laid out city that has parks, trails and recreation for families.  We want Liberty Hill to be full of children playing and adults able to enjoy the beauty and life of our city in safety.  Starting with the end in mind, leadership needs to roll out strategic plans and invest unrestricted funds (while securing as many grants as possible) in ways that prioritize the long-term health and sustainability of Liberty Hill. I believe that Troy and Liz Branigan represent a similar vision.

Some have questioned whether I can be an independent thinker because of my friendship with Ron Rhea.  I am a volunteer pastor who works with Ron.  It is not a paid position.  There are many things that Ron and I agree on and many that we disagree on.  I believe one of the reasons we are friends is because he appreciates that I am an independent thinker, yet I know how to maintain unity and the health of the organization even when there is disagreement.

If you pay attention, you can see that Liz Rundzieher, Steve Mcintosh and Gram Lankford are also a unified team that sees things differently.  Instead of understanding the intricacies of leading a city through growth, they champion individual interests in a manner that will not develop Liberty Hill in an intelligent manner.  They say they are listening to the people, but because of a lack of understanding, in effect they are not putting the interests of citizens first.  You can see that they are unified if you check their Facebook posts, read articles in the newspaper and listen carefully to the debate.  Let me give you an example: Gram Lankford in his interview with Mike Eddleman published April 4th expresses many of the exact same ideas that Liz Rundzieher has and suggests that Steve McIntosh shares them as well.  He not only stated that he does not believe the 29 bypass will benefit anyone and that it will not benefit business owners inside our town, he also implied that the city is making a mistake by moving the roundabout project forward.  Liberty Hill has spent over two years and thousands of dollars consulting professionals including traffic flow engineers to develop a comprehensive transportation plan to accommodate traffic which the roundabout is a part of.  At the City Council meeting on April 8th Liz Rundzieher made a motion which died to table the roundabout project to keep it from moving forward. All of this demonstrates that they are a political party representing a vision for Liberty Hill.  Liz, on Facebook, has even commented, “I seem to be the only one aligning myself with the new Mayor and working as a team to manage growth properly.” Another clue that they are a unified party is the fact that Liz Rundzieher, Steve Mcintosh and Gram Lankford are jointly hosting a meet and greet.  It is perfectly acceptable to have relationships and to be united behind a vision, and that makes them a distinct political party as well.

If you look closely, you will notice that each of these candidates are making promises that target individual groups, but they are not telling you the truth.  There are plans and projects in place for everything they are promising including a plan to handle traffic.  There are many moving parts to delivering on those promises, and if they were not already underway, there would be a 3-5-year delay from when they are elected until anything promised materialized.  Thankfully, all of those projects are underway already.  The paper trail is everywhere.  For example, the last audited financial report on the city’s website is from 2017.  There you can see that spending on public safety increased by 28%.  While reading through the report, you will find a note that they actual revenues of the city were $1M less than budgeted due to less construction revenues than expected.  The city adapted by cutting spending (which it has to do when revenues are less).  Of the $1M cut, $83K was cut from public safety. If revenues had been as expected, spending on public safety would have been around a 47% increase.  That proves that the city is committed to growing the police department.  The point is that with very little research, it is evident that the city is properly responding to growth.  We need to be doing this even better and communicating what is going on better, not changing the fundamental direction.

What Party Do You Support?

This election is both about individual candidates but also about selecting the right team.  A divided team will not be good for Liberty Hill.  I promise that if you vote for me, I will serve the interests of the citizens of Liberty Hill and will explain to you the reason for every decision I make.  I also encourage you to look closely at every candidate and at their associations with one another as well. Healthy teams get things done, and that is why I hope you will vote for Me, Troy Whitehead and Liz Branigan.